Allauddin was the most powerful ruler of the Khilji Dynasty. But he did not inherit the throne of Delhi Sultanate. He was the son of the elder brother of Jalaluddin, the founder of the Khilji Dynasty. ..And also his son-in-law He conspired and murdered his uncle and father-in-law, Jalaluddin. .and captured the throne of Delhi Sultanate. You might have read all these in History books. But do you know he had 70,000 women, men, and children in his harem? Yeah! you heard right men and children too.

In those days when India was ruled by Afghans and Turks, it was a common practice in the ruling class. According to Wikipedia, ‘Bacha Bazi’ is still a common practice in some places in Afghanistan. Afghan Police are unable to stop it because people involved are powerful War Lords. In Alauddin’s harem, there was a eunuch named Malik Kafur. Alauddin had not only physical relation with Malik Kafoor… ..but he also started to love him. And this was the reason why Alauddin named Malik Kafur as his military general.. even when everyone was suggesting not to. But this same Malik Kafur conspires and murders Alauddin in the end. Alauddin Khilji – A Bisexual Emperor – real story of Padmavat Movie

Despite the huge harem, Alauddin Khilji developed an infatuation for Queen Padmavati. It is said about Rani Padmavati that she was very beautiful. It is believed that Maharaja Ratan Singh, king of Chittor Garh.. ..won Queen Padmavati in a ‘Swamvar’ by showing his might and intelligence. The source of whatever we know about Rani Padmavati  is a book called ‘Padmavat’… …which was written by a poet named Malik Muhammad Jaisi in 1540 ad. After this, in 1589AD Hemratan wrote a book named Gora Badal Padmini Chaupai... ..where we find the Rajput version of the story. The stories of both books are the same, with the same characters… .with the only difference is the plot of the story. (Alauddin Khilji – A Bisexual Emperor – real story of Padmavat Movie)

This story of Alauddin and Padmavati is quite interesting. It is said that Alauddin came to know about the beauty of Padmavati.. ..through a Priest of Chittorgarh. That Brahmin was named Raghav Vyas He was banished by king Ratan Singh for his fraudulent acts. Mesmerized by the beauty of Queen Padmavati,… ..Alauddin decided to invade fort of Chittor. Alauddin was defeated in the first battle… thereafter he plans to get Padmavati through trickery. Alauddin puts a condition for a peace treaty that he wants to see Rani Padmavati for once. After this, Ratan Singh also had a condition that he can watch Padmavati only in the mirror. After Allauddin had seen Padmavati in the mirror, Ratan Singh was escorting Alauddin to the doors of the fort… ..where Allauddin’s soldiers arrest him deceitfully. 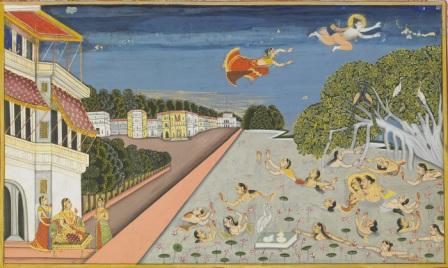 Allauddin demanded Padmavati to release King Ratan Singh Two brave Rajput warriors Gora and Badal of Chittorgarh had a secret plan.. to bring back Ratan Singh without surrendering Queen Padmavati. Allauddin was informed that. .. Queen Padmavati with 700 other women will be sent to Delhi. But those 700 palanquins had the best Rajput warriors of Chittorgarh. Badal and Ratan Singh were successful in escaping Delhi. But Gora dies fighting the army of Alauddin.  Infuriated Alaudding invades the Chittorgarh fort once again. And this time the Chittorgarh army has to face defeat. (Alauddin Khilji – A Bisexual Emperor – real story of Padmavat Movie)

All men along with Ratan Singh die fighting…. .. and all women along with Padmavati self immolate themselves to avoid disrespect. But modern historian like Prof. Irfan Habib believes that the…. .. the story of Padmavati is a pure work fiction. He believes that both were present in different timelines of history. The historians believe that Alauddin attacked Chittorgarh in 1303… ..and succeeded after eight months of military siege. which was just part of his bigger campaign to bring the entire Indian sub-continent under his rule. But contradictory to what historians say,… ..the proof of Jauhar or Self-immolation can be seen even today. Alauddin not only invaded Chittorgarh but.. .. but also attacked and captured the Rajput kingdoms of Mewar, Ranthambore, Warangal, and Gujarat.

In 1299AD in the Gujarat invasion, Allauddin’s military general. …Nusrat Khan bought a slave boy and converted him into Islam. Later he was named Malik Kafur. The boy was so attractive in appearance that Alauddin liked it at a glance. There is no information about whether Malik Kafur was already a eunuch or.. …Alauddin castrated him due to his sexual preferences. ..but it is certain that Malik Kafur took great advantage of Alauddin’s weakness about him. As a military commander, Malik Kafoor was as cruel as Alauddin. He helped Alauddin win kingdoms of South India. (Alauddin Khilji – A Bisexual Emperor – real story of Padmavat Movie)

In1308, Malik Kafur invaded Devagiri; seeing the amount of wealth Looted.. ..Alauddin took the decision to invade the rest of the southern kingdom. It is believed that the amount of wealth looted from .. ..Dwarasamudra and Pandya’s kingdom was so huge that… ..it took thousands of horses and elephants to send it to Delhi. Allauddin had never looked so much wealth together in one invasion. Alauddin’s cruelty can be judged by the fact that.. ..when he doubted that 30000 newly converts Mongols are conspiring against him.. ..he ordered to kill all of them in one day and.. ..enslaved their 30000 women into his harem. Alauddin not just killed non-Muslims, but. …also massacred the Ismaili Shia minorities in 1311.. ..accusing them of incest.

Alauddin was a Sunni Muslim and he imposed.. ..several types of taxes or jazia for being non-Muslims. He destroyed several temples including .. Somnath, Bhilsa, Devgiri, Vijapur, Chidambaram, and Madurai.. ..and looted a lot of wealth and gold from it. The end of the story of Alauddin was similar to his emergence to power. In the end, Malik Kafur conspires and murders Alauddin and.. ..takes possession of the Delhi sultanate with deception. After this, he names a son of Alauddin as a puppet king and becomes powerful. But his happiness did not last long. Alauddin had another son Mubarak Shah who was in captivity of Malik Kafur. Mubarak Shah with his loyal soldiers.. ..kill Malik Kafur and all his associates in the end.