Hello friends, welcome to Indian Art & Culture. Today we are talking about the Difference between Padmavati Ghoommar and Real Ghoommar. So let’s start…

Khamma Ghani to all viewers  Khamma means Blessing and Ghani means lots of.  so. Khamma Ghani means Lots of Blessing and it is a form of greeting in Rajasthan. Every part of Rajasthan is unique and its culture is incredible. Ghoomar is also part of the incredible culture of Rajasthan Ghommar’s song from Padmavati movie was recently released  …which was quite popular but also created lots of controversies. It created controversy because the choreographed dance.. ..sold in the name of Ghoomar is not real Ghoomar This is just a dance sequence choreographed by Kruti Mahesh, ..Choreographed dance has been copied from many traditional dances of Rajasthan. For example Chari, Bhavi, Kalbeliya, and also Ghoomar, And it has been remixed with glamour. but the history of Ghoomar is such that nobody will tolerate any deviation. 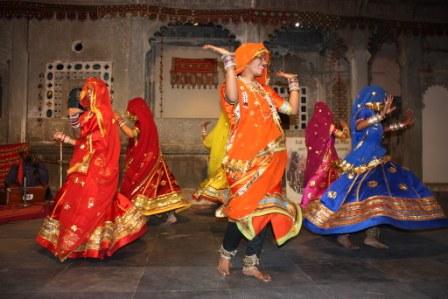 The story starts thousands of years back when Jaipur was known as Amer Kachhwaha Rajput clan used to rule Amer in those times. There was a kind of animosity between Rajput and a tribal community called Bhills. In a battle between Rajput and Bhills, Rajput defeated Bhills. But Bhill is also a martial tribe and never hesitates from fighting and dying. Although, Bhills were defeated in this battle both sides faced massive destruction. Many lost their lives and thus both sides decided to end animosity…. .. and will respect each other’s culture.. and this is how Rajput got to know about Ghoomar in cultural exchange from Bhills. Mesmerized with grace and simplicity,  Ladies of the royal family accepted Ghoomar with open heart   With time it spread across all cities of Rajasthan. (Difference between Padmavati Ghoommar and Real Ghoommar).

Such as Udaipur, Jodhpur, Kota, Bundi. Ghoomar varies from city to city, For example, Ghoomar of Jodhpur has the influence of Garba of Gujarat But all versions of Ghoomar has one thing in common that it does not have obscenity Ghoomar’s steps are very graceful Nowadays Ghoomar is performed on a special occasion … like festivals and religious functions But its importance increases on the eve of teej (A festival for the well-being of family) But it is most interesting on the welcome ceremony of a newlywed woman in her new home. These kinds of Ghoomar is celebrated in the gathering of closely related woman. 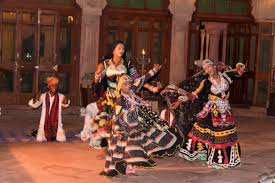 The interesting part is Ghoomar’s competition between the newlywed woman and her sister in law Ghoomar shown in Padmavati movie is not even close to the real Ghoomar. But in fact, it has been copied from many traditional dances of Rajasthan. Which has also been glamorized? This is the cause of the remorse of common people for Padmavati movie. The real Ghoomar can be seen in twirling women at the back. Or this Ghoomar video from Vina Music.  In this, women wear long skirts and dance in swirling motion. Traditional clothes of Rajasthan (Phoshak) have also been messed up with. These are real Rajasthani Poshak In Ghoomar veiled women wearing long colorful skirts dance in swirling motion. Clothes are very colorful and the shiny Simplicity of Ghoomar is the beauty of this traditional dance. (Difference between Padmavati Ghoommar and Real Ghoommar).

These dancing women with firepot on their head is actually performing… …another traditional dance of Rajasthan called Chari. This is popular among Gujjar and Saini Community of Ajmer and Kishangarh in Rajasthan. This is a form of Acrobatic dance in which women dance with clay or brass pot (Chari) on their heads. Chari dance is dedicated to women of Rajasthan who have to fetch water in a pot on their head. The audience feels a sense of respect for art, balance, and discipline of the women performing chari. 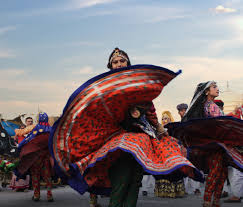 The dance shown in Padmavati movie is not even purely chari. Steps have been copied from another traditional dance of Rajasthan called Bhavai. Which gives a sensuous touch to Padmavati movie dance There is another dance in Rajasthan, as graceful as Ghoomar. and it’s called Kalbeliya. Its name is derived from the name of the Tribe that performs it. Most of whom are snake charmers. as opposed to Ghoomar it has a bit of sensuous touch to it. Even then the whole act looks very graceful. In these women wearing long, black Ghaghra dance on the tune of been (a woodwind instrument). The dancing women try to imitate the gait of the snake which looks fabulous. This step of Deepika resembles more to Kalbeliya than Ghoomar. (Difference between Padmavati Ghoommar and Real Ghoommar).