Hello friends, welcome to Indian Art & Culture. Today we will be talking about the Story Of The Jew Community In Kerala ( Judaism). So let’s start… 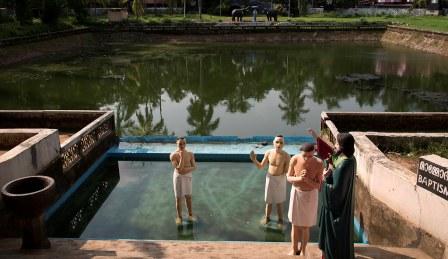 When Israel was born in 1948, it triggered a migration of Jews from Kerala back to their ancient homeland. Thus, from the 1950s onwards members of a community, that had assimilated itself into the social and cultural life of Kerala, began their journey to the Promised Land, a dream they had nurtured through generations. This adoptive land, however, has preserved the relics of their history for the sake of those Jews who come back in search of their roots, and also for historians as well as travelers. (Story Of The Jew Community In Kerala ( Judaism))

Even today, the Jewish Street, the synagogues, and the museum’s stand bathed in their past glory, and wait patiently for their visits. Some believe that the Jews came to Kerala during the time of King Solomon. That is even before the time of Jesus Christ. Others argue that they came to Kodungalloorin Kerala in 70 CE, after the temple of Jerusalem, was destroyed. Whatever that maybe the fact is, they lived in this land for centuries. While the new generation has returned to the native soil, their forebears- like Sarah Cohen-who held Kerala close to their hearts, lived, and died here. The first sites that greet those who come in search of Jewish history in Kerala are the Jewish Street in Mattancherry and the Mattancherry synagogue, known locally as the “Pardesi” synagogue.

The areas where the Jews settled down were known as the Jew Street and the Jew town. The synagogue, which has now been converted into a museum, and the street are preserved as heritage structures. They open the doors to the history of those times when they were vibrant spaces. The Mattancherry synagogue built-in 1568, is 450 years old and is the oldest in the British Commonwealth. It was the most prominent one among the synagogues in Kerala. the structure of the synagogue shows the influence of Kerala’s architectural style, its floor is laid with Chinese handcrafted tiles, nearly a thousand a number, each with its own unique design. Italian and Belgian lamps that came crossing the seas, light up its interiors. (Story Of The Jew Community In Kerala ( Judaism))

The Holy Ark in the synagogue that Rabban, the Jewish leader, built with the help of the regional rulers contains the Pentateuch, the first five books of Jewish Scripture called the Torah, inscribed in rolls of goatskin. These parchments are 100 to 300 years old. Gan Shalom [Garden of Peace] is a spot which holds the history of Jewish life that stretch across centuries, through many generations. This silent space, that cradles stories of the past attracts researchers and historians. The Kadavumbhagam synagogue, one of the earliest synagogues in Ernakulam, was built in the heart of the town in 1200, after the Jews, migrated from Kodungalloor. Unlike the other synagogues, this does not have a Padippura, arched gateway. Its frontage is hexagonal in shape. It is believed that there was a Hebrew press and a 300sovereign gold Torah breastplate here.

The Paravur synagogue is said to have been built in 1164. Its architecture displays a confluence of Kerala and Jewish styles. Today, it is a museum that showcases Jewish religious practices and the history of Jewish life as it was lived in the coastal belt of Kerala. One has to cross the Padippuraand walk along the pathway to reach the synagogue. When the synagogue fell into disuse the bimah (pulpit) was transported to Israel. Another was put in its place later. The second story has another bimah, meant exclusively for women. The Paravur synagogue was unique in that it housed the areligious training center that was the most important one in Kerala. On leaving Kodungalloor in the 13th century, the Jews built a synagogue in Chendamangalam in 1420. It was destroyed in a fire and rebuilt in 1614. It has now been taken over by the State Department of Archaeology and named a protected monument. The Chendamangalam synagogue is the first Jewish Museum in India. This land continues to preserve the memories of Jewish history and tradition for the sake of the new generations.

I HOPE YOU MUST LIKE THIS ARTICLE IF YOU LIKE STORY OF THE JEW COMMUNITY IN KERALA (JUDAISM) ARTICLE PLEASE SHARE WITH YOUR FRIENDS AND FOLLOW US ON  INDIAN ART & CULTURE AND SOCIAL MEDIA.

STORY OF THE JEW COMMUNITY IN KERALA (JUDAISM)