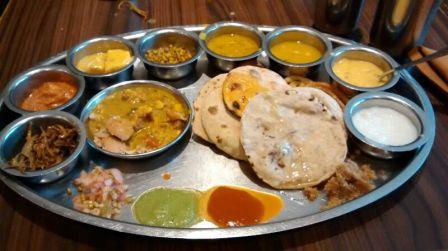 Gujarati cuisine is a reflection of the Gujarati temperament. A little sweet, a little sour, simple yet complex. Unlike most cuisines in India, the Sweet is eaten along with the savories and chillie- hot vegetables during a meal (not after) –perhaps an indication of the practical, commerce-minded Gujarati outlook that ups and downs, good and bad are all part of the palate of life. It has subtle notes and bouquets- a sub-text if you like – that initially confounds but then slowly ensnare the skeptical newcomer.

Gujarati food is predominantly vegetarian, but that does not mean that its repertoire is limited. In fact, it is one of the most extensive cuisines In India. (Gujarati Cuisine)

There is a delicate balance between flavors -Sweet, sour, bitter, salty, and spicy. The sweetness a hallmark of Gujarati food – comes from adding either sugar or jaggery; lemon juice or kokam; bitterness from methi (fenugreek); and spiciness from green chilies or the lethal red ones Gujarat is famous for. Dhania (coriander) Jeera (cumin seed), rai (mustard seeds), Haldi (turmeric), and heeng (asafoetida) are the other spices always at hand in the condiment box that is a fixture in every Gujarati kitchen. 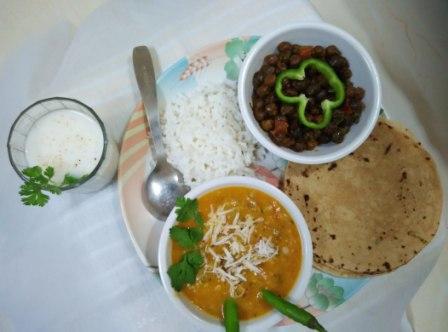 Dal-bhaat-rotli-Shaak (lentils, rice, unleavened bread, and vegetables) are the backbone of the Gujarati diet (unlike many parts of India where ether rice or unleavened bread, not both, are eaten at a meal). Even an ordinary repast generally includes an array of delicious pickles, chutneys, and salads. Incidentally, Gujarati rotlis (bread) are very thin and soft, especially in comparison to their more nearty northern cousins; the thinner and softer the rotlis, the more highly regarded the cook. Generally speaking. home-c0oked Gujarati food is not oily, though the same cannot be said for restaurant food.

When it comes to more elaborate meals, the Gujarati cook is in his/her element. There is a large range of dishes to choose from. Besides two or three vegetables and kadhi (a spicy gravy made with yoghurt) or varieties of dal, there are puris (small, deep fried purted bread), there has to be at least one farsaan (savoury) and one mishthan (Sweet). Farsaan are savouries, either fried or steamed, the most well known outside Gujarat being the ubiquitous dhokla (and contrary to popular belief, there are several kinds). But there are others, equally delicious, such as bhakharvadi kachori and khandvi. (Gujarati Cuisine)

As for sweets, whether it is the famous yoghurt-based shrikhand, baat, osavell sev, jalebi or the mithais mohanthal, kaju/badam katri, mehsur, coprapak or sheero. these are only a few from a long list. Authentic, cheap and hygienically prepared Gujarati meals are served in thalis at sseveral dining halls and restaurants in cities like Ahmedabad, Baroda, Rajkot and Surat. When in Ahmedabad, Chetna on Relief Road, Gopi near the vS Hospital and Gordhan thaal on the Ahmedabad- Gandhinagar highway are a must for the visitor. Not only do tourists eager for a taste of real Gujarati cuisine frequent these eateries, they are hugely popular with locals too – a testament to the quality of the food served here. 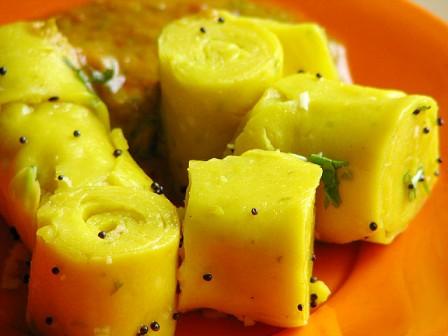 But if one is looking for a place that serves Gujarati food in a relaxed, pleasing ambience, the place to visit is Vishalla, a phenomenaly successful open air restaurant on the outskirts of Ahmedabad. At Vishalla, the accent is on rural Gujarat so the rustic ambience is in keeping with the food. Here one sits on the floor, under the soft light of lanterns, and eats off plates made from leaves. It’s a hands- on experience- literally, since eating with spoons is discouraged. Gujarati folk music and dance are performed at one end of the restaurant, where one can relax, sprawled on coir-plated cots and enjoy the lively entertainment. And the food is wholesome, simple and absolutely delicious. Thick, hot rotlis made from bajra (millet), eaten with fresh, handchumed white butter, kadhi, a couple of vegetables, sprouts, garlic chutney, khichadi (a rice and lentil preparation), a farsaan and sweets like jalebi or sheero. The menu is changed everyday. (Gujarati Cuisine)

It would be erroneous to assume that food all over Gujarat is the same. Regional variations abound. For instance, in south Gujarat, green chillies are used instead of red; and soda bicarbonate is used liberally both to shorten the cooking time and to keep vegetables green. Due to both these factors, the vegetable dishes look greener than their other counterparts. The food is also marked by the usage of more cooking ol. Surat, the largest CIty in south Gujarat, boasts of specialities like undhiyu, jalebi, ghaarl and ghebar (the last three being sweets, and the first, a delicious and much-loved Winter delicacy made with a mxture of vegetables). 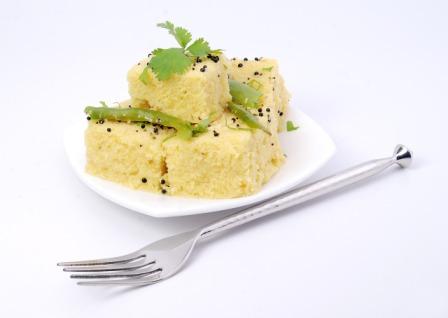 In the Saurashtra region (also known as Kathiawad) in the north-west of the state, bhajilyas (the most common is made with potato – thinly-

sliced roundels dipped in a savoury chick-pea tlour batter and deep-tried) are a tavoured tarsaan. Kathiawadi specialities include tameta-sev nu shaak (vegetable made with tomatoes), ringan no olo (eggplant roasted whole on a coal-fired stove betore being cooked so that it has a slightly burnt flavour) and bharela bhinda (stuffed okra). Dahi (yoghurt) and chhaas (buttermilk) are essential accompaniments to meals in this region. Kathiawadis cannot do without their dahi and chhaas. A good place to try typical Kathiawadi Cuisine is at the Garden Restaurant, an open air eatery in Rajkot city, where the waiters overwhelm you with their hospitality – another Kathiawadi trait. (Gujarati Cuisine)

Eating out is a relatively recent phenomenon in a state known tor its conservative attftude TOwards food. Until the mid-1970s, there were only a nandtul of restaurants in Anmedabad, despite Deing a large and prosperous city, mainly Decause people were content to eat either at home Or the homes of friends and family. A few decade ago, a post-dinner outing meant going for a drive and stopping for paan (betelnut leaves) and the masala tea that Gujaratis love. 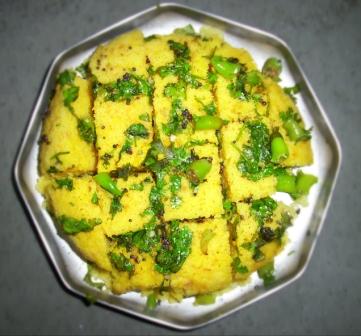 But things have changed radically now. Most of Gujarat’s large cities are doted with restaurants serving Punjabi (north Indian) and south-Indian food. Of late, continental, Thai and Italian food has made an appearance in some of Gujarat’s big cities, but their clientele is limited. Street-eating has also caught on in a big way. Manek Chowk in Ahmedabad’s walled city has for long been a night-time haunt for food lovers. Here, one can feast on traditional Gujarati snacks like papdi (fried, long. thin spicy spears made of chickpea flour) eaten with raw papaya chutney and green chillies marinated in mustard; or ragdo- patties (fried potato cutlets combined with amouth- watering concoction of peas, onions and tamarind chutney). The wayside stalls also serve traditional sweets: kulfi (Indian homemade icecream) and chaat such as bhel-puri (a combination of puffed rice and chutneys) and paani-puri (bite-sized puffs filled a spicy mint-based liquid). (Gujarati Cuisine)

Law Garden in Ellisbridge, a relative newcomer in the street food stakes, poses a big challenge to hoary old Manek Chowk. Law Garden is a veritable gourmet gallery ,with a dizzying array of dishes from all over India, all adapted to tempt the Gujarati palate. And after making a hearty meal, most regulars round off the evening by trooping down the road for kulfi and hand-chumed icecreams for which Ahmedabad is justly famous. Discovering food in Gujarat can be a rewarding exercise. A warning: The Gujarati gastronomic experience can be addictive. To maul the old adage: Once bitten, twice more.

THANKS FOR READING
FOLLOW US ON:
Get Latest News on Blogspote.in
Find Banks IFSC MICR codes on BankIfscMicrCode.BlogSpote.in
(Gujarati Cuisine)